Cuckoo Sandbox project is an open-sourced tool that automates dynamic malware analysis. The project was built using python language which makes the installment process easier to install across all platform. Cuckoo also supports malware analysis on Windows, OSX, Linux, and Android. Cuckoo, also, have a well-defined structure that makes it easy to customize. This feature has allowed analysts across the world to add custom modules and plugins that capture certain artifacts to result the best outcome. Lastly, Cuckoo have a great community support for the project which beyond the scope of this blog but could be found on this github repo. Cuckoo Sandbox Community

SIFT Workstation is a powerful forensics framework that contains most of the open-source tools used by industry-level analysts. SIFT workstation comes in the form of an appliance and could be ran as a virtual machine. Reducing the overhead of installing and configuring each tool is one of its greatest advantage.

Ansible is an open-source software and powerful tools that could be used for various aspects. Ansible mainly know for four overall functionality:
Application Deployment (Like Fabric)
Provisioning (Like Cobbler or JuJu)
Configuration Management (Like Chef or Puppet)
Multi-tier Orchestrion (Like Chef-Metal)

Vagrant is a provisioning platform from hashicorp that is used to spins up and maintain virtual machines in different hypervisor providers such as AWS, VMware and virtualbox. open keyboard shortcuts file.

Configuring and setting up different services manually is both time-consuming and labor-intensive. In this project, I tried to implement an automated solution for a malware analyst to deploy a sandboxed environment using different technology. Starting by Ansible scripts that deploy SANS workstation to a VMware vCenter host then deployment Cuckoo sandbox software along with all its required dependencies using ansible. After that, I used Vagrant to build a virtual machine (In my case, I ‘ll be using Windows 10, however, there is plenty of supported OS), to be used for my malware analysis. 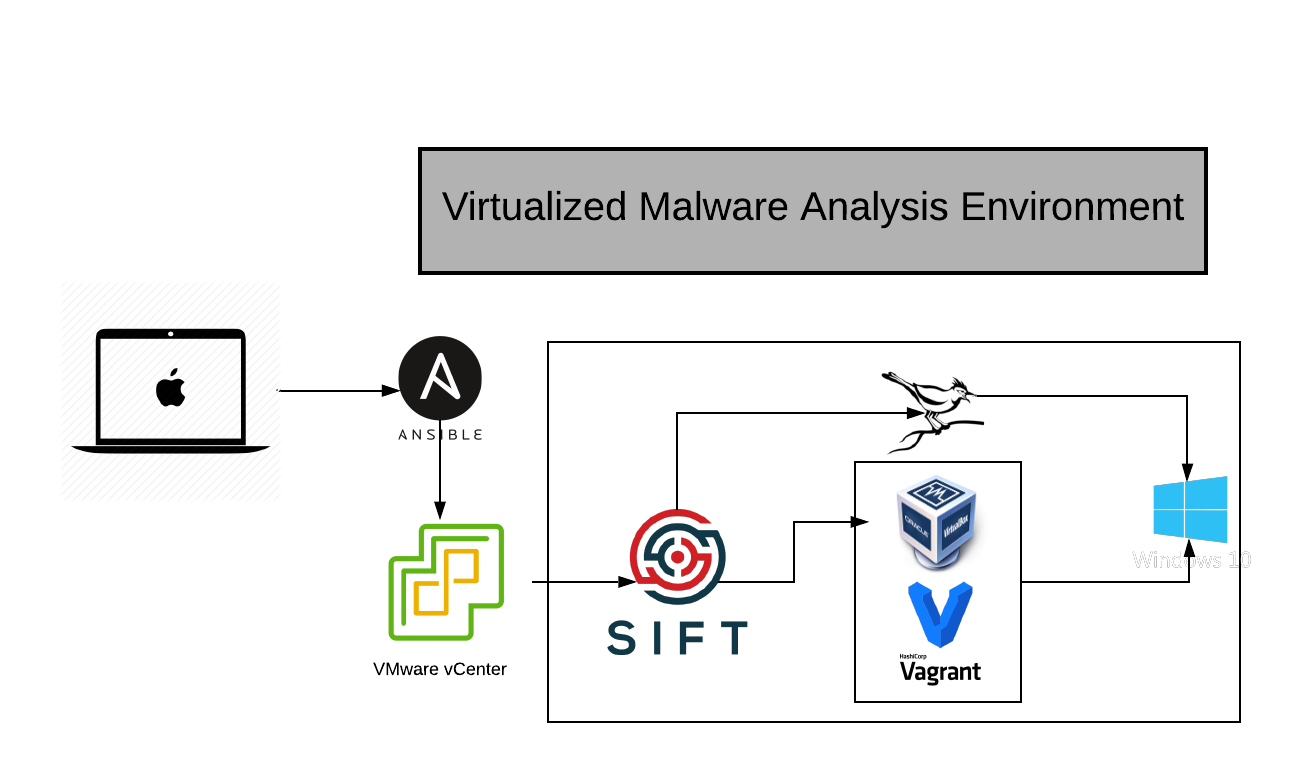 As depicted in the topology we have a computer that communicated with VMware vCenter to deploy the SIFT workstation. After that, we configure the workstation with Cuckoo project using Ansible. Lastly, we provision VirtualBox using vagrant to spawn up a virtual machine to be used for malware analysis.

Before diving into the project let’s take a quick look at the structure of the code: 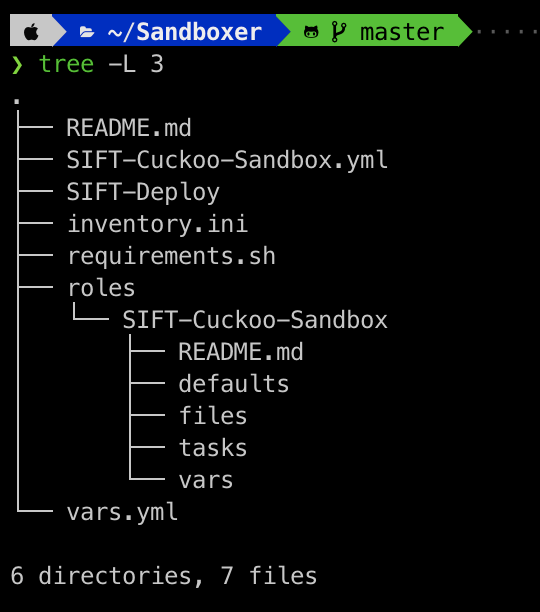 As you can here, we have a bunch of files, starting from the top, we have:
SIFT-Cuckoo-Playbook.yml: which contains the overall tasks(roles) related to Cuckoo project setup.
SIFT-Deploy.yml: which contains the vCenter deployment of SIFT workstation.
inventory.ini: contains the variables used to communicate with the other node such IP, user and password of the client machine
requirements.sh: has all the dependencies used by this project.
roles: has the different subtask of the project
roles\SIFT-Cuckoo-Sandbox\*: subtask to install and configure Cuckoo sandbox project
vars.yml: a centralized place to hold all the variables of the project.
To install the project, nvaigete th efolling github repo and clone it.
git clone https://github.com/sh1dow3r/SandBoxer
cd SandBoxer
./requirements.sh to install all the dependencies
Edit vars.yml accordingly
The rest will follows in the next section.

How does it work?

After we install the dependencies for the project we start with the first step, which is deploying our workstation to vCenter. To do so, we will edit the vars.yml section to have the required information we need to deploy the vm.
Here is a quick example of what my file looks 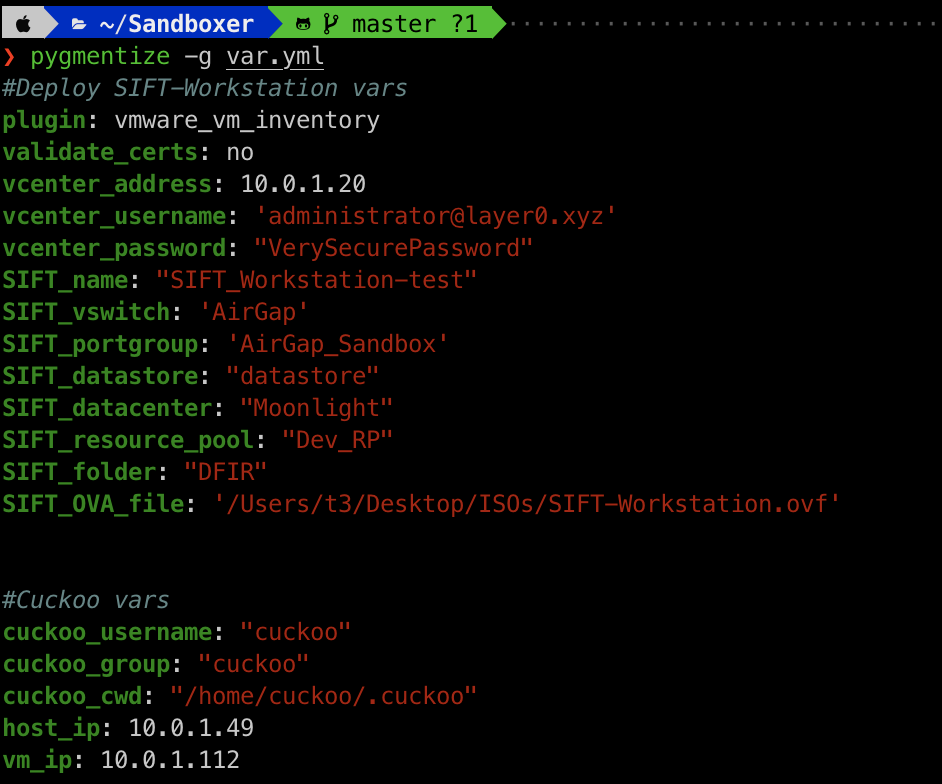 As you can see, in the previous screenshot the ansible playbook is completed and the vm is deployed on the vCenter server. (Note: you may discard the warnings while running the playbook).

Now that we have deployed the virtual machine, let’s starts the the Cuckoo deployment. Starting by adding the required variables in the vars.yml. After you have inputted the necessary vars, you can run the Cuckoo ansible playbook as follows:
ansible-playbook SIFT-Cuckoo-Sandbox.yml -i inventory.ini After issuing the command we wait for a few minutes for the whole setup to be done then we hop onto the workstation to confirm the installment as seen in the screenshot below 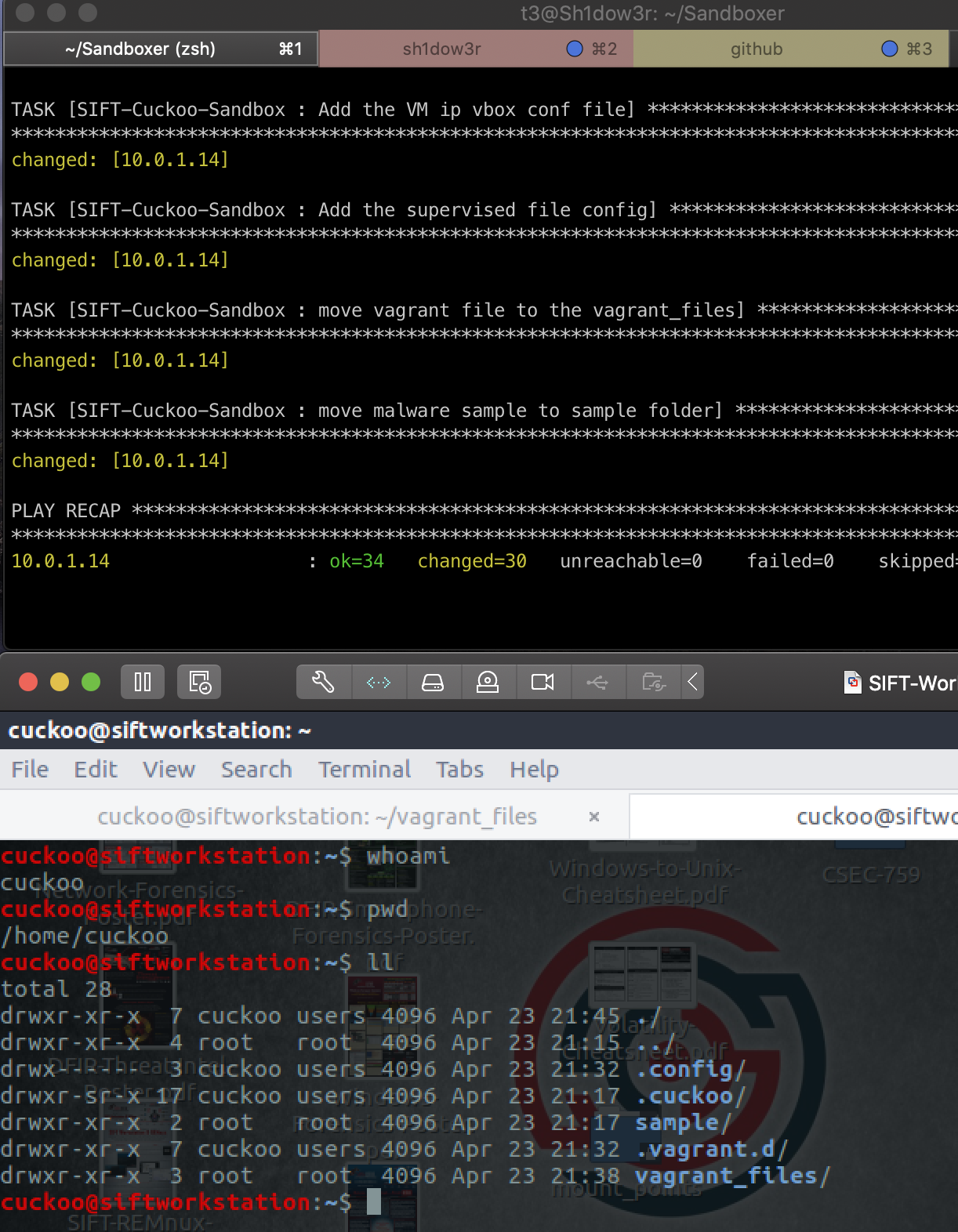 After we confirmed all the configuration is done, we’ll navigate to home/cuckoo/vagrant_files which has the windows10 virtual machine we’re going to use for malware analysis. There should be a bash script called vagrant_script.sh that is going to pull a windows 10 image and set it up with Virtualbox then take a stable snapshot. 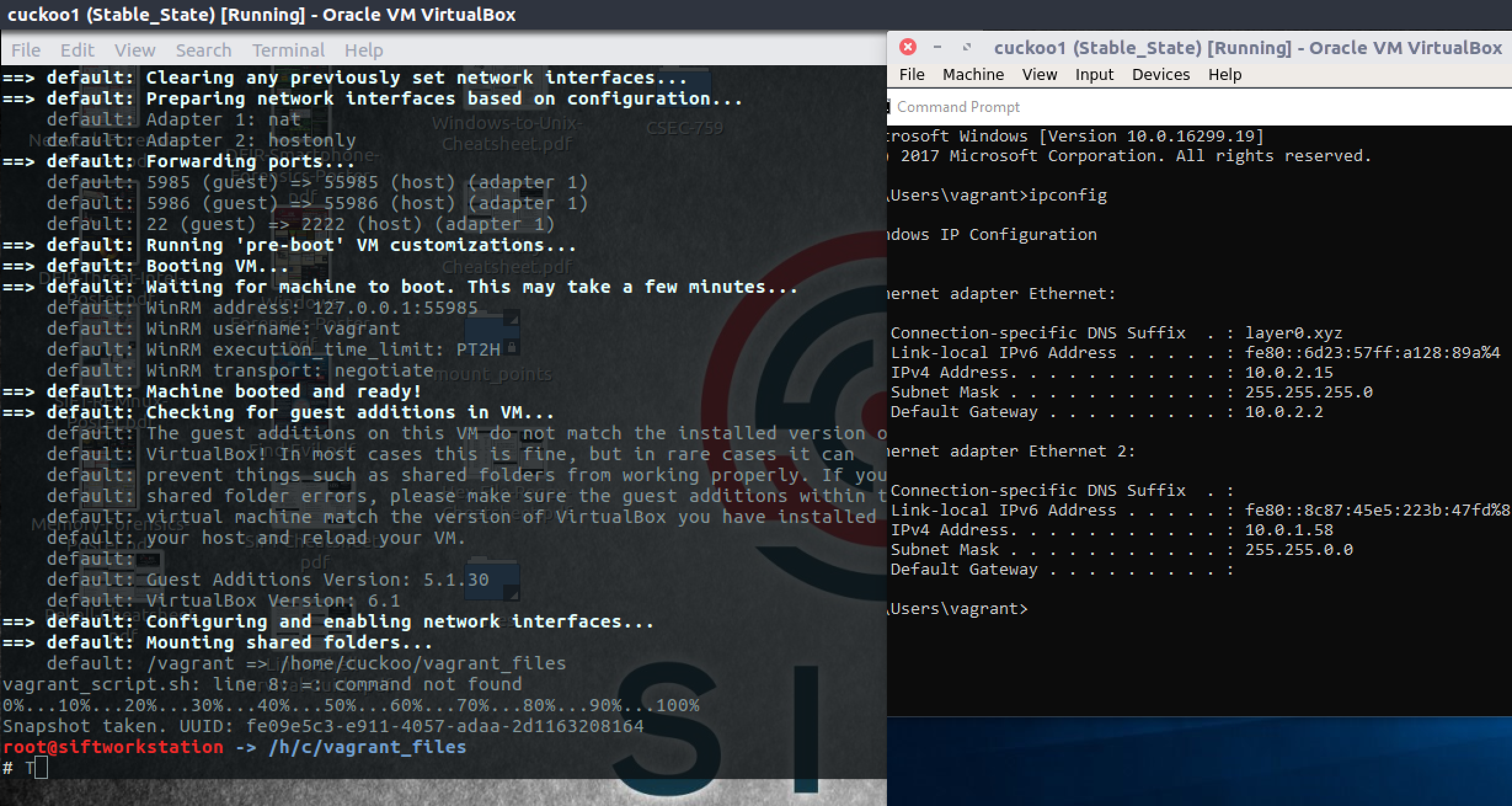 After windows10 is up and running make sure it’s snapshotted and there you go, you have your Cuckoo Sandbox up and ruining! :

Building Malware analysis environment manually requires time, resource and can bee overwhelming to setup. In this project, I proposed a solution of an automated process to setup you’re own malware environment using DevOps tools like Ansible and Vagrant.

Introduction For the last couple of weeks, I have been poking around with a remarkable open-source project called MWDB-Core, short for Malware Database Core. The beauty of this project is its sim...

Introduction Using only VPN as your main method to access you homelab environment is not alway as reliable as you would hope so. VPN sometimes is unstable and hard to troubleshoot, especially re...